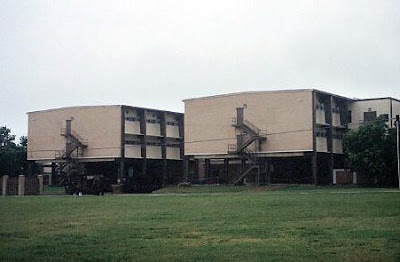 This photo brings back some memories of a very different time in my life. This is the barracks I spent my first six weeks in the active U.S. Air Force 42 years ago. All Air Force basic training takes place at Lackland Air Force Base just outside San Antonio, Texas. It was August 19, 1969 when I reported for active duty to this base and was assigned to a Basic Military Training Flight (the same as a platoon in the Army). I remember it all, too well. After being sworn in I was flown from Newark Airport in NJ on, the now defunct, Braniff Airlines to San Antonio International Airport then transported by Air Force bus to the base. We received our first Air Force meal at a 24-hour dining hall called Hell’s Kitchen. Actually, the food was quite good. Then we were marched to our new home, our barracks.
Each of these barracks was three-stories. These barracks were relatively new, probably only a few years old and, they were air-conditioned and of brick and masonry construction. There were a lot of older, not air-conditioned, wooden barracks on the base used to house basic trainees and permanent party. I was lucky enough to be assigned to one of the new barracks. The first floor was administrative offices, classrooms and a dining hall. Each of the upper two floors in each building housed a BMT flight. I was on the third floor of the building in this photo. From this “base of operations” we went through classroom training on required subjects, physical fitness, drill and endurance training on a tarmac pad across the road from the barracks and went off to the obstacle course, the firing range, the dispensary for physicals and inoculations and other requirements. Air Force basic training, at least when I was there, was six weeks in duration and, while we may have thought it was grueling and demeaning, was actually more like Boy Scout camp when compared to the Marine Corps basic training. Today the basic training program is about eight or nine weeks in duration.
We entered basic training as an unlikely rag-tag bunch of strangers from all over the U.S. and six weeks later we graduated as a tight-knit working unit. It seemed like it was taking forever, but it really went very fast. Yes indeed, this building was the place I started my nearly four-year Air Force career during the Vietnam era. If I weren’t in the process of being drafted into the Army, I wouldn’t have enlisted. But, honestly, I not only don’t regret enlisting, I gained much for my future and I’m proud to have served my country. This photo was taken on a rainy day in September 2003 while I was exploring Texas.
Posted by Ed Helvey at 6:00 AM

I went into basic training in April, 1969. Some of these new barracks were built in late 1967, but our building was finished in early 1969 and we were only the second flight to occupy the dorm. Some of them had gray linoleum, but ours had pure white linoleum. We went to the small Base Exchange across the street and bought Turtle Car Wax and Pledge spray to make our floor sparkling clean... and won town liberty to San Antonio. That was the year after the World's Fair, but many things were still open. I saw the moon landing while in casual status at Lackland. Great memories. Thanks for posting.

Thanks for checking in and I salute you for your service on this Veterans Day. Depending on how long you were in casual. as I noted, I arrived mid-August of '69. there was a chance we were both on base about the same time. I ended up in casual for about a month or so, then I was assigned as permanent party to a video production group on Medina Base - OTS back in those days.

I can't say I remember the color of our floors, but I tend to think they were gray. I also hung out down at the World's Fair - especially the Lone Star Pavilion. I also hung out at the River Roost on the River Walk. It was a fun place and I met a cute little blue-eyed, blonde Texas gal (elementary school teacher) who helped make my Texas time pass faster. Didn't enjoy it at the time, but looking back . . . they were fun times. I agree - Great Memories.

I was one of the unlucky ones. I arrived at Lackland 22 Sept., 1971. I was housed in one of the older barracks. I remember the fire drills we had to go through. We had 30 seconds to vacate the barracks. There was no air conditioning and when the weather outside was not cooperting we did our P.T. indoors. I remember vividly the first night we were at Lackland. Guys laying in their bunks crying "what did I do to myself" It did get easier at time progressed. We had a great T.I. and he tasught us what tream work really meant. I would not trade my experiences in BMT for anything.

I enlisted in February 1971. Was assigned to the old wooden barracks. In retrospect basic training was not that difficult and it really did seem to fly right on by for me. But afterwards I did nearly four weeks of KP as I awaited an opening in the next Security Specialist Training School right there at Lackland. The Security Specialist school was more typical of Army boot camp so it was more demanding than basic training. So I spent a total of about 16 weeks at Lackland and sure was glad to get a few weeks off before having to report to my first duty station, (the former) Craig AFB, near Selma, AL. Such fond memories of my vibrant youth!

I am living in those style barracks built in 67 also right now. I Am in Army AIT at Fort Sam Houston. It sucks because all companies have super nice modern dorms except for mine, we still have the old barracks, supposedly we will be the last class to stay in these because Echo company dorms should be done this year. But at the same time it is a fun experience living in these old school barracks.

Reading the comments reminds me of the six weeks I spent in basic starting on January 16, 1969. It was a difficult transition for me, as I was the proverbial 98-pound weakling; PT was a time to be dreaded. We had a DI who was the spittin' image of Lee Marvin, and I swear he could march from the waist down while his back was ramrod straight. He was a good guy, tough but fair; it was only thru his good graces that I made it through basic and went on to AIT at Fort Ben Harrison, Indiana. Never did make it to downtown San Antone; the furthest I got was the BX. I can't say I remember basic with great fondness, but the rest of my four-year hitch was, with some exceptions, a very satisfactory experience.

Thanks for dropping by John. I just spent the last week in San Antonio recording a large conference. I got back last night. Since you didn't get to spend any time in downtown you can't imagine the changes over the past 45 years or even the last 11 years since I took the barracks photo.

I arrived in San Antonio in June of 69. The only air conditioned barracks were for the men. The women were in the old two-story barracks. I remember the constant drone of the huge fans at the end of each corridor.

Thanks for stopping by. You got to Lackland about 2 months before I did. I don't envy you in the old barracks during the summer. I ended up as permanent party at Lackland for about six months (seemed like six years) through the fall, winter & early spring after Basic. I ended up in one of the two story wooden barracks on the other side of the base. We had those big fans at the end of the halls, too. My room was right next to the fan - great air circulation but lots of noise.

In active air force bases in Texas there are so much to learn. Like the Corpus Christi Army Depot (CCAD) is operated under the US Department of Defense and its specifically under the Center of Industrial and Technical Excellence for wing aircraft and has been since the 1960s.

Thanks for visiting my blog and your comment, Silvia. The Air Force, even though it's the youngest of all the military services, is very rich in heritage and legacy. And, it goes without saying, all branches of the U.S. military share a special culture. I salute all veterans of all the services for their service. And, I salute their families, too, because they sacrifice much for our society as the support of our military members. Indeed, there is much to learn and gain from exploring our military services.