To start off today's entry, ponder this:

… A Zen monk once said to me, “If you're not laughing, then you're not getting it.” - David O. Russell
That's the way I'm viewing my new adventure. I believe in my heart, that if I can't laugh and I'm not laughing, I'm not getting it. I believe we are brought up to take life too seriously. Sure, there are some things in life that are pretty serious like birth, death, taxes and, maybe a few other things. But, in the end, when you reach to appointed time and date that will be listed on your tombstone and death certificate, none of the previous stuff we thought was serious really matters. What matters is how happy we were. How much fun did we have? And, how many other people did we share fun and happiness with?
I see that as a mission. I can't speak to anyone else's mission. But, I believe that my mission is to do my best to make other people smile, laugh and, at least, have a few moments when they can forget about all the serious stuff that may be bogging down their lives. I started doing that several years ago. And, now, with this new adventure, I see it as being more important than ever before. The amazing thing is when I make someone else feel better, I automatically feel better myself.
Today was no exception. Carolyn and I left her place at about 8:45 AM to drive over the 7 mountains and through the 7 valleys to the Winchester Medical Diagnostic Center where they were awaiting my arrival to conduct a PET Scan on me. I had no idea what to actually expect other than what I learned last week in my Chemotherapy Education session with Rodney (you can look back to my article on Day 5, September 5th). On the way, we had to make a quick stop at the Walmart near the hospital where two prescriptions were awaiting pick-up.

My appointment arrival time was at 11:15 AM. We arrived a bit early. Carolyn opted to wait in the car and continue some knitting while I was undergoing the testing. She had parked in a nice spot under a shady tree. 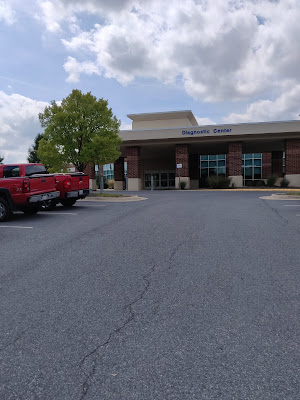 I then went in and met Tiffany at the check-in counter. I have never known any Tiffanys in my life until this year. I believe this was the fourth Tiffany I've met this year. Tiffany gave me a pager similar to the kind you are given at some restaurants that alert you when there is a table available.
When my pager went off, it directed me to a small office-like room with the large #5 over the door. In that little room was a younger, middle-aged woman by the name of Carrie. I think she was my first Carrie in my lifetime. This is a year of firsts for me. I immediately hit it off with Carrie and we had our own little laugh-fest going while she checked her computer, printed out a wrist band and a batch of bar code labels and after a few minutes of playful banter directed me to some chairs back in the lobby and told me a fellow she calls 'Sweet Howie' would be calling me in for preparation for my PET Scan.
Now, Sweet Howie was a very nice young man, I think the modifier, 'Sweet' had nothing to do with anything other than Carrie believed he was a very nice young man (perhaps, not unlike some of her own grown children). As foretold, he appeared within moments and, took me back to an elevator, then down to his preparation room where he took a drop of blood from my fingertip to check my sugar level. Then he installed an IV port in my arm. He was amazingly proficient. I didn't feel a thing from either of the two operations. He then explained the basics of the actual testing procedure before guiding me to the testing facility. 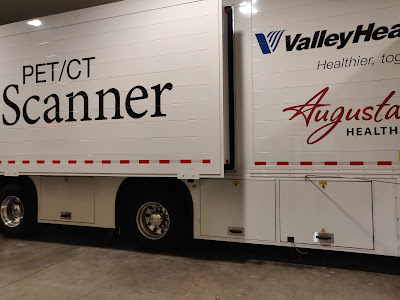 And, there, as we walked into a very large garage-type space, was a huge mobile unit like we've all seen moving down the highways from hospital to hospital. In this huge “trailer” was everything required for this extremely sophisticated test procedure. Howie introduced me to Jennifer and Craig, the two technicians who took over. They guided me into another preparation area got me comfortably seated in one of two relatively comfortable reclining chairs. The other chair was occupied by a gentleman who was just about ready to be led into the other end of this mobile unit for his actual test.
Jennifer then made me radioactive by infusing a radioactive tracer fluid into my IV port. She then removed the IV port and told me to totally relax for about 45 minutes while this material she infused made its way through my system, at which time I'd be ready for the actual PET Scan. So, I sat back and relaxed. I decided to run a “movie” of many of the memories of my travels and the people I had visited over the past few years of travel. 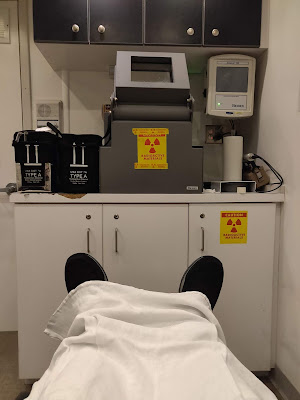 There was an interesting device sitting next to some cases on the table across from me, all marked with the universal Radio Active symbol. A bit later when Craig came in to take me to the actual testing machine, I asked him if that was a Geiger counter I was looking at. He answered in the affirmative. So, I said if you checked me right now, would it make an indication. With a somewhat, humorous smirk, he said I'd make it go off the scale. Jennifer guided me to a restroom to empty my bladder before the test began. 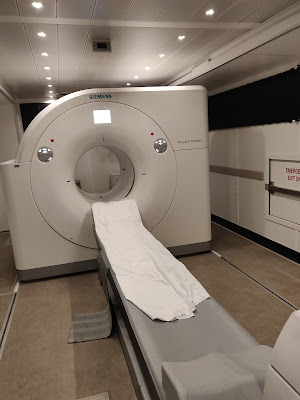 Craig led me into the testing room and there it was. The PET Scan machine. I guess it would be imposing to some people. I just saw it as a large CT Scan machine. Craig got me on the moving table, propped me in the position he wanted me to be in and asked if I was comfortable. I think that was a rhetorical question. I was as comfortable as I could be on this narrow board with my arms over my head and my hands clasped together and my legs straight with a cushion under my knees. He then informed me I had to remain in that position and not move a muscle for about 35 minutes.
Well, I did some more reviewing of my previous travels. And, then I got the brilliant idea that I would count the seconds between each movement of the table. Each movement was only a couple inches at a time. This helped pass the time. Finally, the table pulled me out of the big tube, Craig came in and gave me a hand to pull me up and off the table and the testing was complete. I should mention that before and after the test Craig and Jennifer and I had some repartee with some chuckles and laughs. I couldn't let this opportunity go by.
That was it. I was done. Jennifer led me out of the garage area to the elevator and up to the next floor and pointed me to the lobby. We bid adieu and I headed out, but not before sticking my head back in Carrie's little room and cracking another quick joke or two, and having her tell me to come back and visit her to let her know how my treatments progressed and how well she expected me to do. It's always nice to make friends who can make your life nicer. 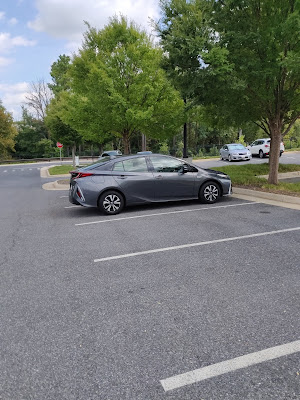 I walked out to the car where Carolyn was awaiting my return. We decided to make a Costco run to pick up a few things on sale and to fuel her new hybrid Toyota Prius with the lowest priced gas in the area. On the way, we decided we were both hungry (especially since I wasn't allowed to eat since yesterday afternoon). So, we went to a very nice Chinese Buffet we both knew (we affectionately call it the hog trough). We had a delicious early dinner. Then made our Costco stop before heading back to her place in West Virginia over the mountains and through the valleys. We arrived at about 6 PM and that was the end of the adventures for Day 10 of my experiences since September 1st.
So, that's all for today other than to say, live free and be happy. EH
Posted by Ed Helvey at 12:12 AM

As usual, specialized medical tests often require driving long distances to larger cities, where the procedure itself takes less time than parking the car. As one who avoids large cities and too many people, I dread the day when I might have to go through what you are doing. But if it can save my life, I guess I'd tolerate it...especially for a Chinese buffet at the end of it! Keep on!