Today I enjoyed a favorite meal from my childhood. Meatloaf with mashed potatoes and, as a side, I had some green beans with ham. Delicious. Carolyn had a cousin and her husband visiting their mother (also Carolyn's cousin) from the Denver, Colorado area. So, we all met at the nearest Bob Evans and enjoyed some decent food and good conversation. It was a pleasant repast.

Carolyn also had one of her feral cats converted from a him to an “it.” He lost a precious part of his anatomy that men protect like they were the family jewels. Actually, they are often referred to as the family jewels. This action will prevent her “herd of cats” from growing any larger (she hopes). It took her several attempts over several weeks to trap this particular cat. He was a tricky one. But, yesterday she finally outsmarted him. He wasn't too happy, but he was still pretty much out of it when we picked him up to bring him back to the herd today.

And, when we got back, as Carolyn went around the back of her house to take the cat back to where he belongs I heard her yell, “Oh my God!” So, I ran to see what the problem was. She said there was a skunk on the steps of her back porch. Well, I instinctively knew it couldn't have been a skunk or she would have been sprayed and I would have smelled the skunk from around the side of the house. 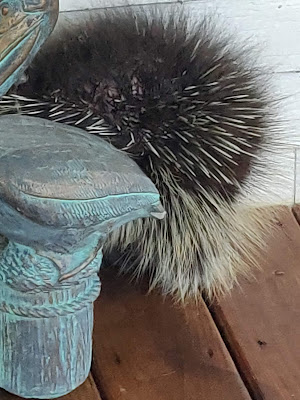 No indeed! It was my first experience with a wild porcupine, live and in person. Sure, I've seen them in zoos and on TV, of course. But, this was my first encounter with one up close and personal. Well, Mr. Porcy decided to go to the top of the steps and squeeze through the narrow space between the spindles that made up the porch gate. It was now on the porch.

Both Carolyn and I attempted to nudge the prickly little beast toward the open gate (I had opened it as a way for the little guy to egress). We used a broom, being careful to not get too close to where he might throw some quills at us. He was stubborn and chose not to follow our directions. Ultimately, we decided that he would eventually find his own way off the porch. I checked later in the evening and it appears he moved on. By the way, I used the male gender, but I wasn't going to investigate to find out if he was actually a she.

So, there was the real excitement for today. Other than that, I was back to answering emails, texts, Messenger messages and phone calls. I also found an interesting book on my BookBub ebook feed. I thought it would come in handy as I'm going through my adventure and assist me with these journal posts for my blog. So, I ordered it.

I then received a call from the fraud department of one of my credit cards checking to see if there was some fraudulent activity going on with one particular card, the one I always use to order things from Amazon, including Kindle books. So, it was that book they were checking on and it was a legitimate order. However, they also mentioned another attempted charge that I suspected was a possible scam. Fortunately, it didn't go through. So, I believe I'm safe.

In other words, I want to know everything I can about my condition so I'm fully prepared. On the other hand, I have some anxiety about this test showing something negative that I may not be prepared to accept. But, as I've said before. It is what it is. Knowledge is power.

I have to set the anxieties aside and prepare for whatever I learn and then go forward from there. I'm sure I'm still supposed to be around for a long time or I would have died somewhere along the roads I travel – often camping in secluded locations. So, I feel like I'm going to continue on my 46 year life plan. I still have people to see, places to go and things to do. Forward and onward.

Here's a thought for today for you to think about and dwell on.

Waking up this morning, I smile. Twenty-four brand new hours are before me. I vow to live fully in each moment and to look at all beings with eyes of compassion. James Trunslow Adams

Live free and be happy. EH

I have yet to meet my first porcupine, but like you, I would be leery to antagonize it... or feed it. Our host here saw a mink a couple weeks ago, the first sighting in many years. And at dusk one evening, I saw a coyote emerge from the field to the east and run toward the back corner, probably chased out by the irrigation system making it's rounds. We also saw one south of town in broad daylight. He crossed to road ahead of us, and he was huge...about the size of a German shepherd! We always keep Angel on a leash out here and stay with him, even though we are on a remote farm. He won't run off, but we have more control over his safety if he is leashed.

Best wishes with the cats and other critters, and also with the results of other PETS...pardon the pun. I just had to say it.