The "Name My Van" Contest has ended and the van now has a name. For the details and the new name go to Behold, "My McVansion"

I have noticed, as I’ve read the posts of numerous different RV bloggers and RVing groups that many have named their homes on wheels, whether motorized or towed behind another vehicle. Over the years I played with the idea by having a name for some of my cars. I guess that goes back to when I was a kid and my father named his 1951 Chevy coupe that was my grandmother’s car until she suddenly died. The car was kind of a dull dark green. My father took it to an Earl Scheib Auto Paint place and had them do one of their $19.95 (I believe) paint jobs on it turning it into a light green car. Believe me, for $19.95, you didn’t expect nor did you get much of a paint job. He then officially named his car the “Ruptured Duck.” I was in the sixth grade and I recall it ever so well.

I affectionately called my 1996 Cadillac Seville the “Silver Bullet.” The official Cadillac color, as I recall, was platinum, but it still looked silver. It was a lean, mean and fast driving machine. I’d have to say it was the best driving, handling and performance car I’d ever had. I’d dearly love a Cadillac CTS-V. It put Mercedes and BMWs to shame on their own test tracks in Germany. But, in reality, I’m beyond my days of high performance cars. At this time both in my life and the economy, I’m more interested in economy and reliability.  But, I digress.

I’ve done two posts about the Ford van I recently acquired and I’m converting into my micro motor home. I’ve posted photos of it and plan to post more photos as I do the actual conversion. But, as I’ve been thinking about the future, I’m of the belief that this will be the first of a small number of future homes on wheels for me. I believe they should have names. 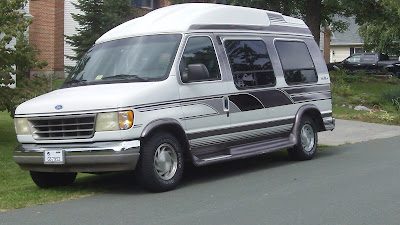 I’ve been kicking around a few names in my head, but none of them have really given me any warm fuzzies. I’m not going to reveal the names I’ve considered of my own because I am interested in your creativity and I don’t want to influence you. So, here’s the deal. While I’m in no hurry to make this decision, I would like to do so in about 90 days – or to be more definitive, I’ll say by April 30, 2012. That is a little more then 90-days. I will consider any and every suggested name that I receive between today, January 24, 2012, and April 30, 2012.

There is a prize for the person submitting the name I ultimately select. The winning submission will receive a $50.00 e-gift card from Amazon. You can use it to purchase any of the millions of items: books, electronics, clothes, household goods, etc. from the Amazon Store.

Here are the rules and parameters:

Remember the sky is the limit. Submit as many names as you want to. And think of this like an Internet domain name. The name should be as short as possible while being as memorable and recognizable as possible – again, I use the Starship Enterprise as an example. The best thing is to not pre-judge any name as long as you can come up with an interesting and justifiable description and reason the name should be considered.

I was reading a blog of some other “technomads” earlier today and they just ran a similar naming contest for the 1961 GMC conversion bus they graduated to about seven months ago. They had named their previous two RV’s as well. In their case, when the dust finally settled there were several names they were torn between. They actually ended up selecting a name themselves from an event and something that had transportation roots, historical roots and some ethereal meaning. While they were searching for the vintage bus conversion of their dreams, precisely on the trip to see the bus they selected and on the day they selected it, they did some sightseeing and that’s where they discovered the name. However, they never even thought about it until they were down to trying to decide between the last few names they hadn’t eliminated from all the submissions they had received.

I don’t think that’s going to happen in my naming process. I’m really looking forward to all your creativity and submissions. And, of course, when I make the final selection, I will give the winner full credit and arrange to get the Amazon e-gift card forwarded to you. I should also mention that this is open to anyone anywhere in the world reading my blog as long as you have the capability of ordering from Amazon.

Most likely, I’ll have the name stenciled on the left and right doors of the van right below the windows. I might put it on the back, too, if there is a place where it can be seen. So have fun and enjoy playing “Name My Van.”

Enthusiastically,
Ed
Posted by Ed Helvey at 6:00 AM

I like it! I don't think I would have thought of that one. It's on the list. BTW, do you still have your van now that you're in your own "sticks and bricks" again? I do believe I recall you selling it, but that CSR stuff seems to be creeping in a bit more these days.

Hel on Wheels (spelling is correct)

Thanks, Ed. I've added your submissions to the list.

Hi Ed, Sounds like a plan. MMMMM The name I will toss into the hat is Ta da!!!(The Dream Machine) The name is kind of self explanatory. We live and we dream. Thats what keeps us motivated. Living the dream is the challendge. Its to easy to set in the armchair and coach from there. Good luck in your new lifestyle....HoboJoe

Interesting! It's certainly on the list and in the running. Thanks for submitting.

Did you have an option of VanFaster...Vanwriter. either one could work, you are in the go with your Vanfaster vehicle, or redy to write and go in your Vanwriter..

Thanks, Marcia -- Interesting ideas and they are added to this list.

Another good one from Handy Ande - Thanks Andrea - keep your thinking cap on.

Helvetica Bold. A play on Helvey and the font writers use regularly.

(You may know that I named my red cargo van The Scarlet Schooner.)

Hi Ed, Thought about the name and was inspired by the name "Snoopy" as I noticed the long nose on the van. Enjoy your blog keep on writeing....HoboJoe

There is some cute play on words there. Back when I was in grad school in frozen Syracuse decades ago, I was looking for a business name for my recording and sound business and someone, can't remember who, came up with "Sounds like HEL...vey" I gave it some consideration, but ultimately decided against it. I've added yours to the growing and very interesting list. BTW, I do remember the Scarlet Schooner, very well, but I didn't know the name you had chosen for it. Good one.

Thanks, HoboJoe for your added contribution. Interesting. Now if I could just get a black nose for the hood and a couple floppy black ears I could hang over the driver passenger doors when I'm parked . . . Hmmm. Ya got me thinking, Joe.

I've always gotten a chuckle out of "Cramalot" and it certainly fits for a van camper. I love your approach to name selection.

Thanks, Jim -- indeed! Interesting play on an interesting place. I never would have thought of it. You're in the running. And, I'm sure having some fun with the ideas people are sending my way - mainly comments here and by email.

Can we leave multiple entries?

Kind of a play on networking acronyms and south park......N00b (you'll see ME on my google login)

Yes, multiple names submissions are fine and solicited. The more the merrier. I've got quite a selection so far - some very imaginative ones. It may be harder to make a choice then I thought it might be.

Thanks for this one. Interesting - almost sounds Chinese, Eastern mysticism. If you have more, send them along until the end of April. Then I begin the chore of selecting THE one, if it has materialized.

Another one from me...

Oooooh! A couple more interesting ideas, Steff. They are in the pot. Thanks for not being able to pass it up.

E for Ed
Dazzel for where he/she will be taking you.

I have some great names for you:

Gina and I had fun with this. Hope you are doin' well.

Thanks, Chilipepper. Interesting! Incorporates my first name and the dazzle idea. It's on the list.

BTW, sorry for the delay in my reply - I had an opportunity to each some extra coins for the gas tank - and I've been receiving a bunch of emails with names. Trying to catch my breath.

Edie, boy, you really tried to capture several of the moods of my lifestyle and the van as it fits into it. Some definitely good ideas and I've added them all to the list.

Again, as I mentioned to Chilipepper, sorry for the delayed reply. Even though I'm "living free" I'm not living FOR free. ;-)

Hi Randy and Gina -- Awesome hearing from you. I hope it's not too hot down there in the south of Florida, yet. I guess it's coming, though.

Wow! You guys really put your heads together for these names. Definitely some contenders. I came up with bunches of names, but the names people have been submitting are so much better. This is great fun and thanks for playing my game - but, heck, you're in that business, huh? Ya gotta play to win!

Hope to see you guys soon. I'm having lunch with Judy on Tuesday and looking forward to it.

You're under the wire and on the list. Thanks for playing.

Great to see you last week.